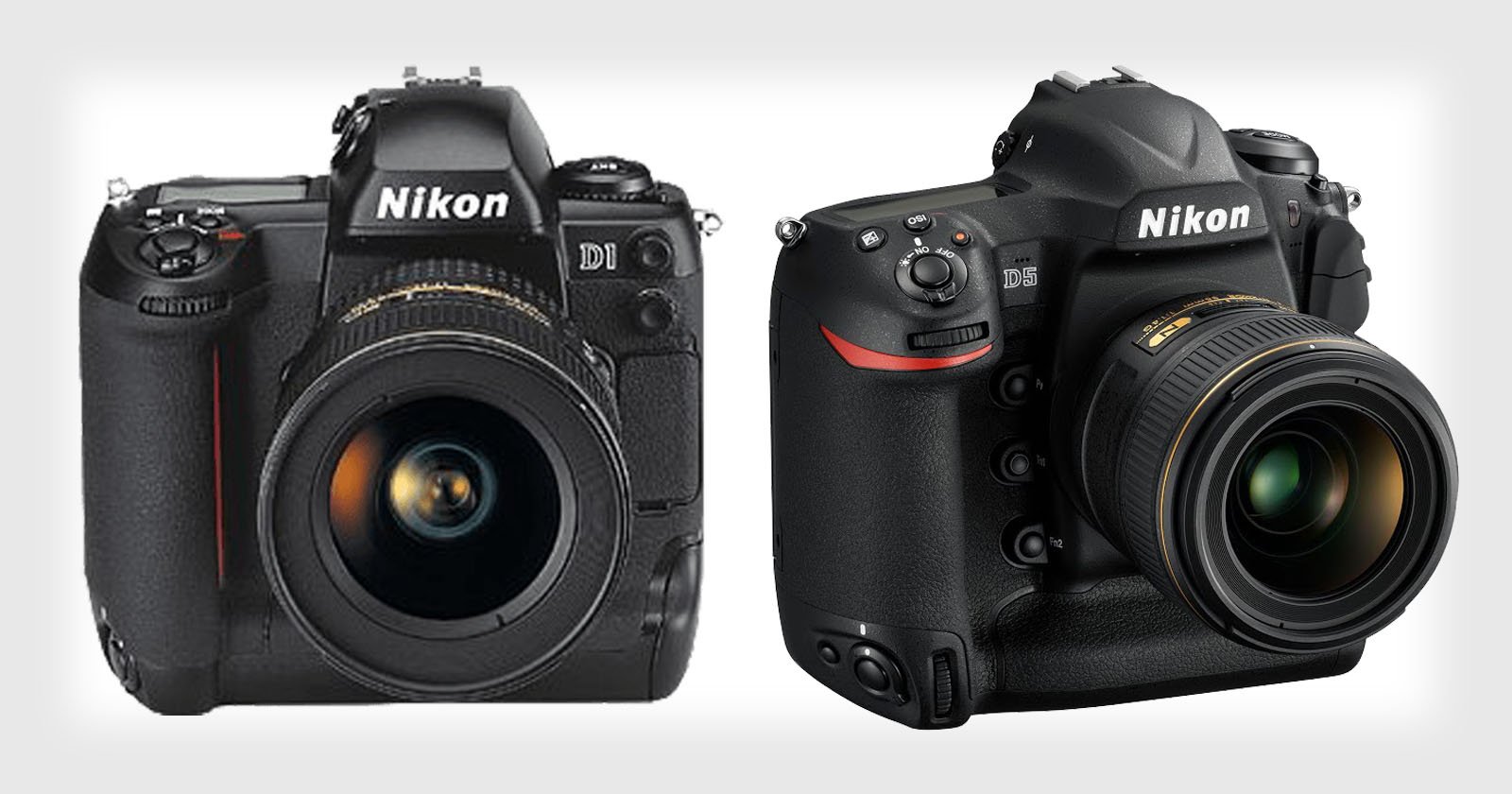 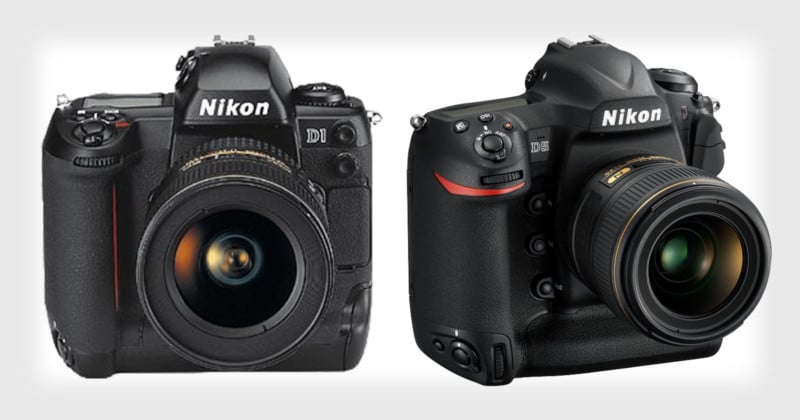 Twenty years. They have gone by fast. I can remember the first time I saw a camera with a screen on the back of it at a sporting venue, and now a camera without one is considered vintage. However, the look of modern cameras is only the tip of the iceberg when it comes to changes.

Spending time with the Nikon D1 to create the piece on it really opened my eyes to what it was to take a photo in 1999 and how different it is now. I recently took out a number of different cameras from multiple manufacturers to see if I could put into pictures and words the difference among them. 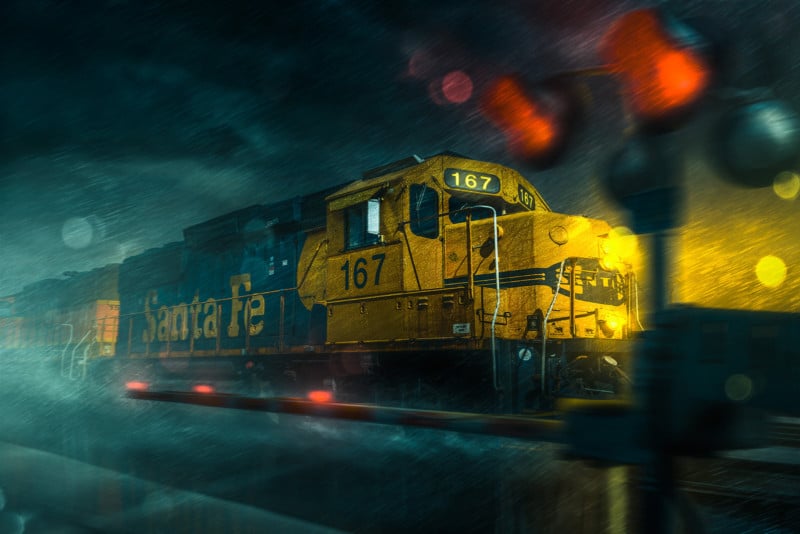 Using a modern camera is like walking a tightrope that is 10 feet wide and has three layers of safety nets below it to catch you as you fall. I’m not trying to say that creating an incredible image is easy — I’m saying that creating a bad image is harder.

It is a development growth mirrored by that of popular social media platforms, where getting a photo that is “good enough” and then piling filters on top of it has become commonplace. It doesn’t mean that the resulting image is bad, it just says that the effort to create it was less than it took photographers 10 to 20 years ago.

The difference between the output in creativity isn’t a new concept. Just look at the many that have critiqued images from Cartier-Bresson without knowing how hard they were to create at the time he lived, even by a master of his caliber. All too often we take for granted the luxuries we have gained or never knew we were once without.

In an effort to discover what has changed, I headed back to the train tracks of northern Arizona. I wanted to create a piece that would make it easy to measure before and after, so photographing freight trains with modern camera platforms was the best way I could try to keep the comparison accurate. Not to mention that there is something relaxing to me about being in a forest where you can hear an approaching train echo as it rumbles towards me miles before it appears around a bend. 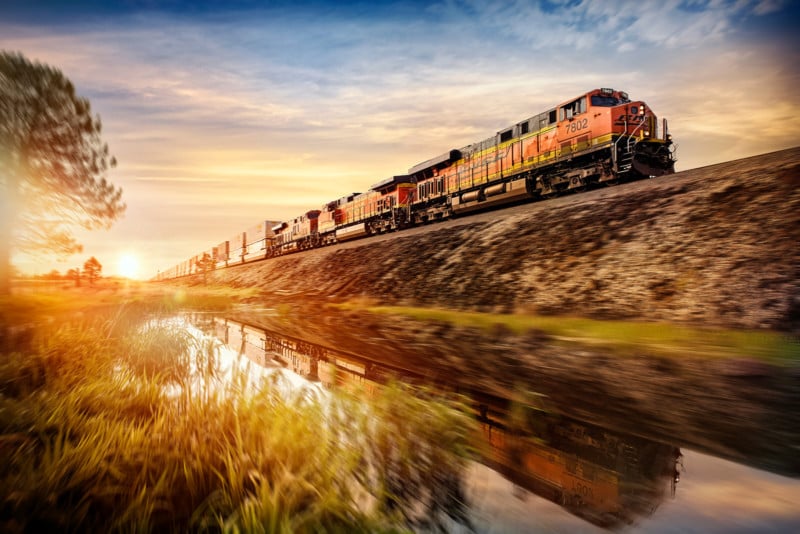 If you read the first piece in this series (featuring the Nikon D1) then you know that every photo was taken during the daytime. This was not by accident, but rather a necessity, as cameras 20 years ago did not have good (or any) low light performance whatsoever. Even thinking about photographing at dusk was out of the picture as anything higher than ISO 400 was a confusing mess of noise that looked more like an abstract painting than a photograph. This is not the case with modern cameras.

As coincidence would have it, the first day I was looking to test the newer cameras, I was delayed by a photo shoot that ran long. By the time I had wrapped and driven up to Flagstaff, the sun was down and there was a mix of snow and rain coming down. Not to fear, as I had a Sony a7R III with me and low light wasn’t a problem… although sitting in bad weather for hours waiting for the right train to come by was annoying.

If I had been shooting with the D1, I would have never driven to the tracks that evening, as it would have been a waste to photograph a train knowing there was zero chance the resulting image would go into my portfolio. 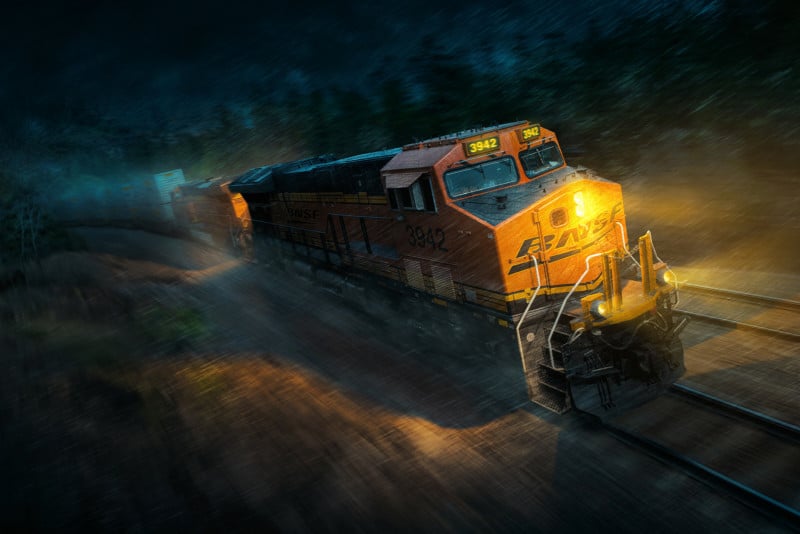 The idea of better sensor performance doesn’t apply completely to low light performance, but also dynamic range in good lighting conditions. A day after heavy rain came calm clouds and a lot of standing water in the flatlands around Flagstaff. I decided I would drive around looking for reflections that I could use to show off the shadow/highlight balance and performance that modern cameras have given photographers. Armed with a Nikon D850, I walked around in the mud while contemplating lenses to use for the image. It should surprise no one that I landed on my trusty 24-70mm G for the shot.

What struck me about using the D850 vs the D1 was how much I didn’t have to worry about nailing the exposure. While I always strive to hit it as perfectly as possible, I knew that if I was over or under by 3 stops, I was completely safe. 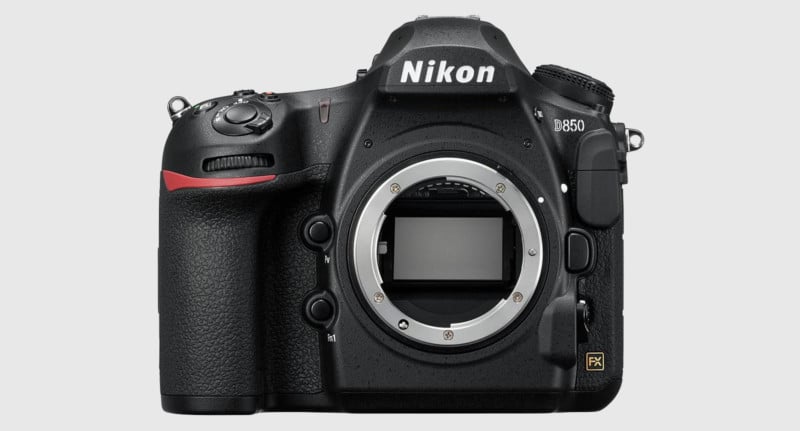 This mindset in creating couldn’t have been more different than that when I used the D1. With many of those images, I had to choose whether I was willing to give up the highlights or the shadows before pressing the shutter button. Of the 12 images I put up in that article, there are hundreds that didn’t make it because of the limitations of the sensor in fast-changing light. 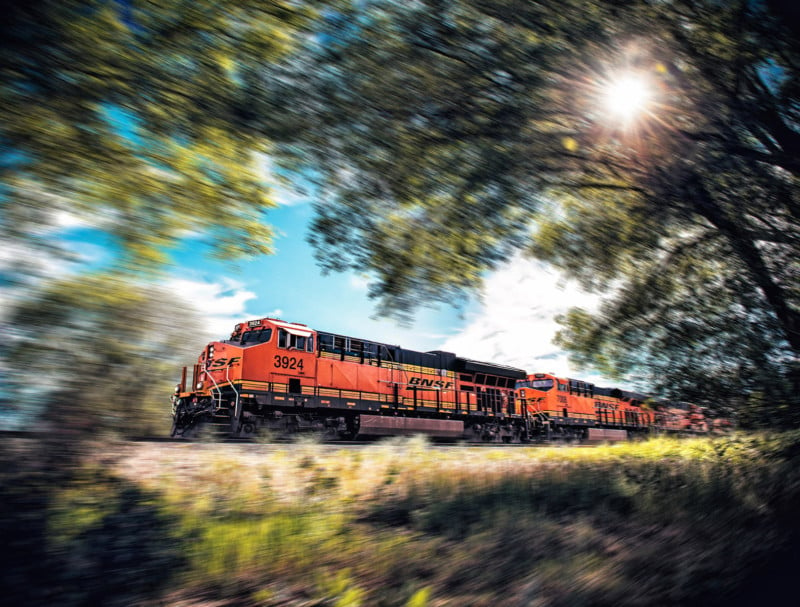 Another area of camera development over time that really stood out to me was the overall feel of auto adjustments being implemented by the camera. Now I do not mean auto-exposure as I am a pretty die-hard manual setting person. Where I noticed the giant leap forward was in auto-white balance.

Before, cameras like the Canon 1D and Nikon D2 had white plastic to pull from. Nowadays, cameras direct read from the sensor and nail it almost every time. With the Nikon D1, I had to find what kind of lighting I felt would exist for the train, flip down a metal cover on the back to access the WB button, and then dial it with hopes that a cloud shift didn’t happen by the time the locomotive arrived. While the D1 did have auto-white balance, it was often inaccurate and would even jump around depending on the hue of the train cars going by.

As I mentioned in the beginning, the ability to take a bad photo has gotten harder over the years. If you want proof of this, look no further than your phone’s camera. You as the user must try hard to take a photo that is out of exposure range. The same can be said about professional cameras. The technology exists to save even the most reckless of beginners, therein making the bar of entry into this art significantly lower. 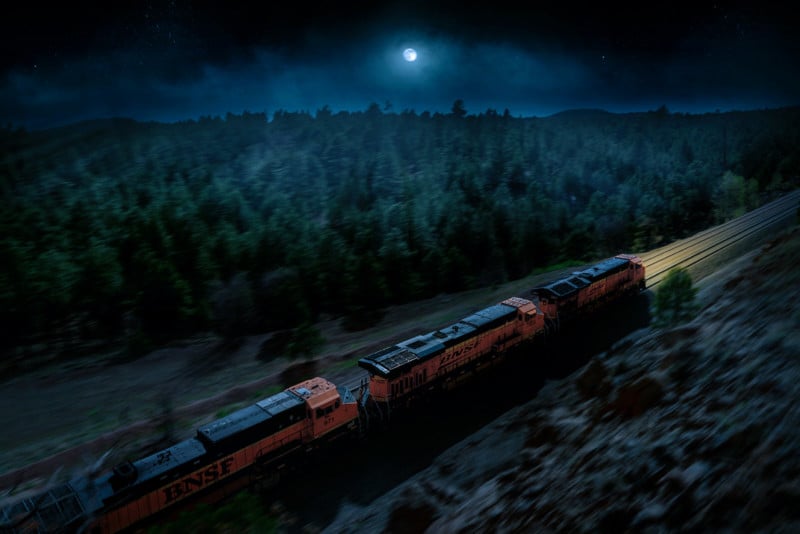 This “ease of use” is most obvious when it comes to mirrorless. The idea of knowing what the camera is going to do takes the guesswork out of creating. Where I would come back with 50-60 frames on the D1, and even the D850, with mirrorless I would often go out for hours and come home with a camera that saw only 5-10 shutter actuations for the day. When you think about it, not only is this modern advance an exercise in learning how to create a proper exposure, but it is a way to reduce the footprint a photographer has on the shutter life of their camera.

With the hope of comparing the most modern of platforms to their ancestors of two decades ago, I brought three mirrorless systems along with me; the Hasselblad X1D, the Nikon Z7, and the already-mentioned Sony a7R III.

Each system has its pros and cons, but overall the ability to hop between them was a simple transition. One of the images from this piece was actually a product of the camera being with me when I saw the light that caught my eye. The truth of the matter is that every modern camera has advancements that stem from years of learning from photographers the world over and their experiences. 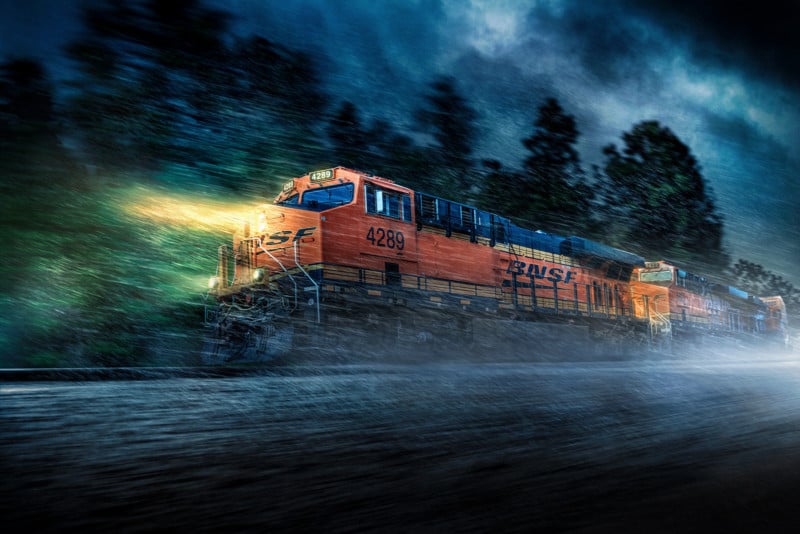 Which brings me to the one aspect in which I feel like we have not progressed over the past 20 years: brand loyalty. Over my career, I have had the opportunity to use many platforms from all the major camera manufacturers and have even have served as an ambassador for two. While I love the systems that I use, I use them knowing that they may work well for me, whereas another system is more suitable for another photographer.

This diversity in the gear we use should be celebrated as much as the diversity in photographers that stand behind the lens. Over the last 20 years, the photographic community has lost sight of the fact that those we stand next to in the studio, shoot next to on the sidelines, or type next to online are our brothers and sisters, not rivals, and definitely not enemies.

My greatest takeaway from shooting the many platforms I have over the last couple of months, and embracing the camera for the sake of photography and nothing else, is that we all should be grateful for how far cameras have come and together celebrate the opportunities we have to create where our predecessors did not.

About the author: Blair Bunting is an advertising photographer based out of Los Angeles, California. The opinions expressed in this article are solely those of the author. You can see more of his work on his website, blog, Facebook, and Instagram. This article was also published here.